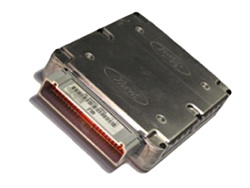 On the 5L Mustang, the EEC-IV (Electronic Engine Control, version 4) is located behind the passenger side kick panel. EEC-IV features can vary by year or model, but for the Mustang, the EEC-IV has the ability to record and store data from up to 80 start-up cycles in its memory. Additionally the EEC-IV runs a continuous self-test during normal operation, and errors detected will be stored in the EEC's Keep Alive Memory, or KAM.

These codes can then be extracted from the KAM for later diagnosis. The codes are referred to as "Continuous Memory Codes" and are stored in the KAM until they are overwritten, or the EEC-IV loses power for more than 10 minutes (disconnected battery). When these codes are downloaded from the KAM, they will be displayed in a "morse-code" like fashion. The EEC-IV emits pulses to represent these numeric codes; for example, two pulses, a short pause, then four more pulses would signal a code 24.

These codes may then be read from the ECU/EEC using one of three different methods. By connecting to the EEC-IV test wiring harness and the Self-Test Input connector, you can extract codes using either: an analog volt-meter, the car's "Check Engine" light, or a commercial code scanner.

— EEC-IV Abbreviations Reference —
Written by Skye Nott – Created 2010-10-18 Published 2010-10-18
Contents © Copyrighted and published under the following terms:
Released under the terms of the CC Attribution-NonCommercial-ShareAlike 2.5 License