There are quite a few different styles of housings. The one that I wanted and found has axle tubes that are straight rather than swedged to a smaller diameter where they meet the housing ends that support the axle bearings. This will allow me to cut the tubes and use the old ends again in the narrowed housing. My housing also has the "large" housing ends with 1/2" bolts at 4 3/16" spacing. Some modifications I plan adding are a large 'bung' for adding oil and to inspect the ring gear through, epoxying a strong magnet in the bottom to catch any metal chips and upgrading the vent to lessen chance of pressure building up and causing an oil leak.

[Note: Using straight axle tubes and large bearing ends will not allow the use of original Mustang U-Bolts, shock plates or brake backing plates - plan ahead or don't alter the original recipe! The above notes were for a custom project.] 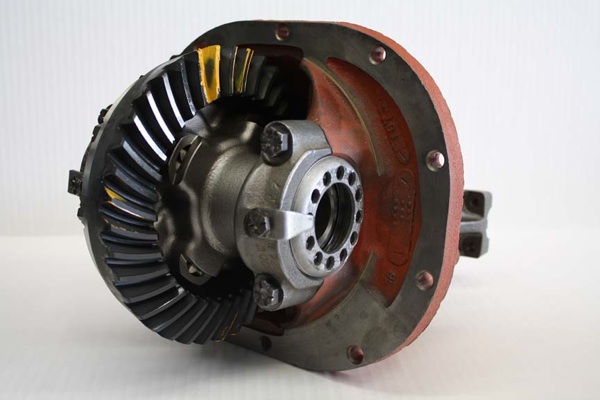 This is the heavy iron casting where everything comes together in the center of the axle. It holds the ring and pinion gears in alignment and is removeable as a unit allowing fairly speedy ratio changes if you have a selection of third members handy. I gave up looking for a 'nodular iron' casting which is stronger and more desireable than the standard. Nodular castings can be identified by a raised 'N' cast between the webbing above the pinion shaft. Be sure to get the right number of splines in the carrier to match your axles, mine have 31.

The various 9" center section cases (housings) have features that may be preferable to certain applications. Case part numbers are found on the inside of the large 10-bolt mouting lip. Early housings with part numbers beginning with B7 up to C7 have no side oil fill hole and plug. C7 and the later "N-case" have the fill hole & plug. Car and truck/van centers are interchangeable with consideration for the U-joint flange size and length and axle spline size.

All 9" center cases are suitable strength for mild to moderate street and light strip use. Most centers have a single vertical reinforcement rib with the C7 ones the strongest and most plentiful of these. The ones with double reinforcement ribs are known as the WAR, WAB and N-cases. The WAR and WAB cases are not considered any stronger than a standard case. The N-case is deemed the strongest and were found in muscle cars and occasionally in vans and pickups.

Lastly, note that most cases use a carrier bearing size of 2.89", while the N-case and some early cases use 3.06" diameter bearings. No big deal - just check if you're ordering rebuild parts for yours.

Supporting Member to hide this ad & support a small business

My search netted me a pair of 31 spline axles with large sealed ball bearings and the small Ford 5-lug pattern. Many of the truck axles had a larger lug pattern and less desireable roller bearings. There are also 28 spline axles but in this case the more the better. Many aftermarket axles are available for high power applications but I felt stock truck axles would be plenty for the power potential and low weight of this car. I cut the lightweight stock bearing retainers off with a hacksaw and fabricated new ones frome 1/4" steel plate. They are sort of 'C' shaped which allows them to be installed around the axle without removing the bearing. Once the housing has been narrowed the axles can be shortened and resplined to match at a competent machine shop.

Most cars up to 1972ish had 28-spline axles with a 5 on 4.5" bolt pattern. High-performance cars sometimes received 31-spline axles with the same pattern. Both are fine for street use but the 31's are more desired with axle-twisting slicks or serious driveline loads like a heavy 4-speed car. All trucks and vans use 31 except early E/F100's and the Bronco - however, they use a larger wheel bolt pattern. Mustang 8" and 9" 28-spline axles are identical and interchangeable.

Visually, the car axles can be identified as 28-spline when the visible outboard center is a rounded rectangular 'dish' whereas the 31-spline versions have three drilled dimples.

Replacing the Differential with a Spool

A full spool is used in place of the differential that normally allows left and right wheels to turn at different speeds when turning. The differential also causes one tire to spin and the other to just sit there if traction is lost. The spool eliminates the lost traction problem by directly connecting both axles to the ring gear and also increases strength and gear alignment under stress. However it is not for street use because of cornering problems. For street use there are several differentials with locking or limited slip features. Spools are available in steel or aluminum. Haven't talked to anyone who uses aluminum. A mini-spool locks the axles together but relies on the stock differential carrier and is much weaker than a full spool. Mini is not recommended for drags but people use them.

Measure twice and cut once doesn't get it here, more like measure four or five and cut once. First you need to know what you want as far as width. This involves the width of the car wheel wells and spacing for the tires and then the backspacing of the wheel mounting surface from the actual tire profile. Should the driveshaft be centered in the measurements? Better check because many driveshafts are offset to one side for some reason. Don't forget that the pinion shaft is offset in the third member. That gives you the distances from wheel mounting surfaces but then you still need to subtract the distance from the wheel mounting surface to the 'back side' of the bearing housing and thats where you would cut the tube. Isn't it? As I said back in the housing section, my axle tubes are straight an I feel I should be able to press the original housing ends back into the shortened tubes and with care in welding should have no alignment problems. I don't know about the other housings or the aftermarket housing ends.

Look at the lower nuts that hold the carrier (pumpkin or diff head) in the housing. Picture using a socket with an extension to remove these. On an 8" you can remove all of the nuts this way. On a 9" you can't get to a couple of the lower ones, the pinion housing hangs down and blocks them. You have to use a spanner.

The location of the spring perches on the 1964-73 Mustangs is the same for all models, the extra width is all outboard of the spring perches. This means (for example) that a 70 mustang housing will fit into a 66 model, but will be 1 inch wider on each side. Fitting rear wheels with an extra 1 inch backspacing will then locate the tyres back in the same location, if required. (Note: be sure to check for differences in rear brake hose location and fittings between the housings).

Note: The lengths stated are for a complete axle from brake drum to brake drum. For 64-73 Mustangs subtract 5 inches to get the bare axle housing width.

Where to find the 9" rear axle

How to recognize 9" housing centers

On the Rear End Ratios

A number designates a conventional while a letter indicates a locking rear end.

Article based on this article at the Classic Mustangs Wiki.